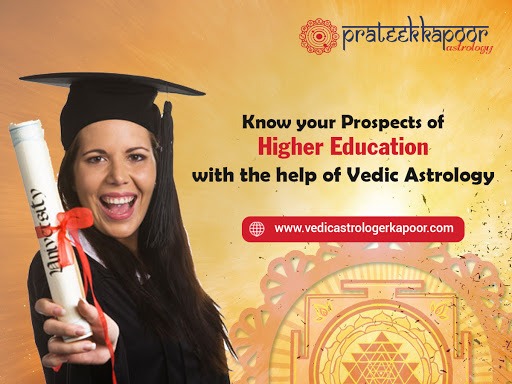 Astrology for education:-Know from the horoscope what, how, and how much your child will study

If you have ability and ability through humility, then you get money. If there is wealth, then there is a communication of faith in the mind of man, and

where there is religion and then he gets happiness.

In such a situation, it becomes the utmost duty of every parent to make arrangements

for the better education of their children. Chanakya has also said that children should be engaged in learning because nitika: sila sampannaah bhavati kul pujitaah.’

should study so that their bright future can be made.

Astrology has an exact answer for this,

through which you can give the right direction to your child.For example,

if the Bhavesh is strong in the horoscope of a person and there is an auspicious planet in the Navamsha,

then the sum of his higher education is formed.

In order to see the sum of education in the horoscope of the person, the second, fourth, fifth, ninth, and

eleventh house of his horoscope are discussed. For higher education,

etc. in the horoscope of the person.

In today’s era, it is very important to have a strong financial condition to earn education, and

to see the economic condition, the second house and benesh should be in the center in

the horoscope of the person and there should be a change of house between the two.

The fourth house of the horoscope is examined to know how the education will be in the institution,

if the fourth house is strong in the person’s horoscope,

then the education of the person is done in big institutions.

The fifth house of the horoscope is analyzed to test the intelligence of a person. The intellectual level of a person is checked by examining how Panchmesh is related to other planets etc.

The information about the higher education of the person is done from the ninth house, if

the Navamsha of Navamsha is Vargottam or auspicious class in the horoscope, then the person gets higher education.

If the strong Ekadesh has a vision or conjunction in the center triangle with the ninth and fifth house,

then the sum of higher education is formed.

If we look from the point of view of the planets, then by looking at all the conditions present in the

horoscope of any person, it can be known that how the child will be in

studies and in which field he will be successful.

Moon – If the Moon is of Scorpio in the horoscope, then the memory power is very strong. Information about the memory power of a person is obtained from the strength and weakness of the moon,

if the moon is weak and not in the right place, then the person’s memory power is very weak. If the strong moon center is in the triangle and up to the fifth day of Shukla Paksha,

then the memory power of the person is very strong.

There are three ways to get higher education –

then such talented students are successful in the competitive examination

selected on the basis of merit and they are enrolled in state educational institutions.

Payment – In the horoscope of the native, the owners of the constellations of the second, fifth and ninth, and

eleventh house should be in the center or in the second house and with the constellation of the owners of the ninth and second houses,

as the owners of the constellation of the twelfth house. If there is a relationship with them, then the enrollment of such a person is done on the payment sheet.

the dwadashesh falls in the navamsha of the fifth lord, ninth and second lord,

then the person is enrolled by donation.

Foreign education- If the ninth bird is in Dreshkana in the horoscope of the native,

then the person becomes likely to go abroad for education or for specialization in any subject.

If the relation of fifth house, ninth and fourth house

Or the relation of their sub-owners is with the twelfth and eighth house in conjunction or in any other way,

then the person takes education abroad.

education takes place in the subjects related to that planet. Brief description of the topics related to planets in the horoscope [ Astrology for education ]-