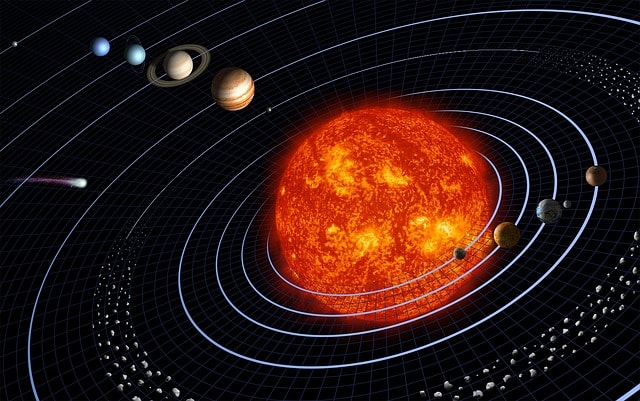 Effect of combust planets:The setting planets should also be considered while analyzing the birth chart. The set planets found in the horoscope have their own effect and

it is necessary to consider it by a divine being. Without analyzing the set planets, the result of the horoscope can also be astya. First of all, do we know why planets set?

When any planet in the sky comes between a certain fractional distance from the Sun, then due to the heat and

heat of the Sun, that planet loses its aura and power, due to which it stops visible in the sky and

this planet is called The name of the planet is given. This proximity of each planet to the Sun is measured in degrees, which are as follows and are called for

The Effect of combust planets-

If Mercury is retrograde, then it is said to be set when it comes 12 degrees or

*In the event of the setting of any planet, its power becomes weak and

it is not able to give results smoothly. Set planets are ineffective as if their energy has been taken away from them.*It is necessary to have the knowledge of how much a planet is in transit while performing its results. The more debilitated the planet, the more it will fail to give fruit. By calculating, it can be found that what percentage of a planet is in the constellation.

*For this it is necessary to see the distance of the setting planet from the Sun. Only then is the correct knowledge about the efficiency of that planet. Suppose the moon will set even if it is 12 degrees away from the sun and

will set even if it is 1 degree away,

second position because the closer a planet comes to the sun, the more That’s when his power wanes. While doing the results, the study of the planets in the horoscope should be done with caution.

If the setting planet is a friend of the Sun,

it will cause less harm and if it is an enemy, it will do more harm.For the smooth functioning of the set planets, additional force is required and only after seeing

the nature of a set planet in the horoscope, it is decided that how the

additional force can be given to that setting planet.

If a planet is set in a horoscope as well as being auspicious from nature, then the simplest and

most effective way to give it extra strength is to make the person wear a gem of that particular planet.

The weight of the gemstone

Is determined only after correctly estimating the strength of the set planet. Wearing a gemstone gives extra strength to the set planet and it performs its task well.

But if a planet is inauspicious in nature along with setting in a horoscope,

then such a planet cannot be given additional strength by the gemstone. In such a situation, the use of gems is prohibited, no matter how debilitated the planet is. In this situation, the effective way to increase his ability is to chant the mantra of that planet.

By chanting the mantra continuously, the planet not only gets extra strength and

its nature also turns from inauspicious to auspicious. For any shaky and inauspicious fruitful planet in the horoscope, first of all, its Beej Mantra should be worshiped with Salavakh Jaap and

later that mantra should be chanted regularly.

When the Moon sets, there is disturbance in the life of a person. Relationship with mother gets spoiled, mother’s health is not good. If this setting moon is with the eighth house or the eighth house,

then the person suffers a lot of mental distress. There may be diseases like anemia, lung diseases, mental stress, depression, and asthma.

Mars is the significator of courage and might. When it sets, there are problems like lack of courage,

increase in anger, tension with younger brothers, land dispute, nerve pain, accidents, court cases, physical pain to wife. If Mars is in the 6th house with malefic planets or is forming a vision relationship,

then there is a possibility of accidents and diseases. The relation of Mars with the sixth house puts a person in debt. Mars set in the 12th house makes a person addicted to drugs.

If Mercury is the factor of business and speech, then the intellect does not work properly. Speech gets worse. Lack of faith in the person, body cramps, breathing, skin diseases, and throat diseases, etc. Having a relationship with the lord of the 12th house makes a person addicted to intoxicants.

Dev Guru Jupiter is an auspicious planet. However, when they set, the auspicious effects of the Guru diminish. Due to the absence of the Guru, there is a hindrance in the birth of children, the elders will suffer,

there are obstacles in education and the person becomes an atheist. Jupiter in the Antardasha of Jupiter gives problems like liver disease, typhoid fever, diabetes, sinus problems, court cases,

differences with teachers, disinterest in studies.

Is the factor of enjoyment-luxury and opulence, when Venus is set, it gives problems in marriage,

then it gives disorders of kidney, bladder and sex organs.

Shani, considered to be the god of justice, is a karma-dominant planet. Due to their failure, there is trouble in job or business, rift with superiors,

loss of social prestige, addiction to drugs. Back pain, pain in legs, diseases of the nervous system occur. If Saturn is in relation with the lord of the sixth house,

it gives pain in the spine [ Effect of combust planets ].