View Profile Book Pandit
Maa Durga Paath Important Information
The most acceptable and advantageous technique to pray to Goddess Durga and gain her favour is to recite the Durga Saptshati. The Markandeya Puran's Devi Mahaatmaye chapter provides extensive documentation and explanations of the goddess Durga's history and persona. The Bhuvneshwari Samhita, a compendium of the goddess mother, claims that the Durga Saptshati is likewise thought to be limitless, just like the Vedas, with no beginning or end.
The character of Goddess Durga is thoroughly developed and elucidated in the Durga Saptshati in the form of 700 shlokas (verses). It comprises thirteen chapters and can be roughly separated into the goddess' three primary attributes. The first character is created in the first chapter, followed by the middle character in the second, third, and fourth chapters, and finally the perfect character is compiled in chapters five through thirteen, or the final chapter.
The first character is thought to represent the goddess MAHAKAALI (goddess of destruction and destroyer of evil), the second character is said to represent the goddess LAKSHMI (goddess of wealth and prosperity), and the third and best incarnation is said to represent the goddess SARAWATI (goddess of the mind and learning).
One chapter is devoted to prayers for Goddess Mahakaali; three chapters are devoted to prayers for Goddess Lakshmi; and nine chapters are devoted to prayers for Goddess Saraswati.
The Durga Saptshati additionally has 90 MAARAN means, 90 MOHAN means, 200 UCCHATAN means, 60 distinct VASHIKARAN means, 200 STAMBHAN means, and 60 VIDVESSHNA means, making a total of 700 shlokas and 700 methods.
The Durga Saptshati tells the tale of King Surath, who was defeated by his foes and shrewd ministers and lost everything he held, including his kingdom, army, subjects, and followers. The Saptshati also tells us the story of Samadhi, a businessman whose evil wife and son drove him out of the house in order to usurp his wealth; however, the common element in both of these tales is that despite all trials and betrayals, their devotion to their families and fellow humans never wavered. They were top of mind for him at all times. Samadhi and King Surath were both followers of Sage MEGH.
King Surath and Samadhi, the merchant, both conducted penance and concentrated on Goddess Durga after hearing her recite the Durga Saptshati from their mentor/guru, Sage Megh, and as a result of her kindness, they both recovered what they had lost. According to popular belief and legend, whomever recite the Durga Saptshati with a pure heart would undoubtedly realise their goals. Furthermore, it is said that 100 repetitions of the Durga Saptshati can grant a person all of the Siddhis.
To King Surath and Samadhi, Sage Megh first delivered this special collection of the Durga Saptshati. Sage Markandeya, the son of Sage Mrakund, recited this collection to Sage Bhaaguri after that. Maharishi Gemini, a student of Rishi Ved Vyas, was given this pious collection by Pakshigan, son of Drona. Then, for the benefit of humanity, Rishi Ved Vyas turned this into a tale form and turned the Markandeya Puran into a serial. 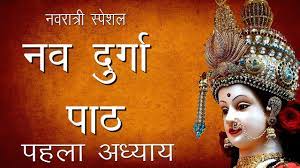 The recitation of Durga Saptashati in Navratri will save you from all diseases and will give special fruits.There are four Navratri in a year, out of which one is Chaitra Navratri and the other is Shardiya Navratri, while there are also two Gupt Navratri.Navratri has a special significance in Sanatan Dharma. In these nine days, it is also said that many special tasks can be completed by worshiping the Mother Goddess. According to Pandit Sunil Sharma, the goddess is considered....