View Profile Book Pandit
What advantages come from performing the Tulsi Vivah?
According to tradition, there once lived a demon king named "Jalandhar" and his wife "Vrinda," who was an ardent follower of Lord Vishnu. Jalandhar was nasty and used to bully people, who then pleaded with Lord Shiva for assistance. Lord Shiva requested Lord Vishnu's assistance after failing to overthrow the king. To deceive Vrinda, Lord Vishnu assumed the identity of the evil king Jalandhar and snatched her virginity. In the end, Lord Shiva vanquished the demon king when he had lost all of his power.
Furious about this, Vrinda cursed Lord Vishnu, saying that as a result of his bad "Karma," he would turn black and that just as Vrinda was suffering as a result of his husband's divorce, so too would Vishnu have to pay back. Later, Lord Vishnu put her soul into the basil plant known as "Tulsi" to represent her holiness after she committed suicide by drowning in the ocean.
Everyone is aware of the outcome: Lord Vishnu's incarnation as a black Shaligram stone and his other "avatar," Lord Ram, had to separate from his bride since she had been taken by the evil monarch "Ram." On "Prabodhini Ekadashi," with Lord Vishnu's approval, he assumed the shape of Shaligram Stone and wed Tulsi. Since that time, worshippers have performed this ritual to commemorate the event.
What procedures are involved in performing the "Tulsi Vivah Pujan"?
(1)The Tulsi plant's pot is dressed as a bride and set in the "mandap" that has been made in the space designated for prayer.
(2)Powdered vermilion and turmeric are used to adorn the pot. Alongside the Tulsi pot, sugarcane sticks, "Amla," and tamarind branches are placed.
(3)Participants in the "Kanyadaan" ceremony observe fasting until the evening ceremonies are complete.
(4)The Shaligram stone is set next to the pot, acting as the bride while "Tulsi" serves as the groom.
(5)The same rites, including mantra chanting, are carried just as they would be in a typical Hindu wedding.
(6)The Tulsi plant is connected to the "Mangalsutra." The newlyweds receive gifts of flowers and rice.
(7)Both the Tulsi plant and the Shaligram Stone have a fabric attached to them, signifying the unity of their marriages.
(8)The devotees who are in charge of carrying out the "Kanyadaan" ceremony finish the rites by going around the "mandap" four times.
(9)The fabric that has been tied to the bride and the groom is taken off after the final mantra has been recited.
Sweets called "Prasad" are given out to friends and family members.
What supplies are needed to do the "Tulsi Vivah Pujan"?
(1)A priest will officiate at the wedding.
(2)a Tulsi plant that is three years old or older.
(3)A "Shaligram" stone that symbolises Lord Vishnu One can use the idol of Lord Vishnu if the stone is not available.
(4)To serve as "Mangalsutra," a turmeric leaf was bound to a thread.
(5)Uncooked grains of rice
(6)The priests and other worshippers will receive sweets.
(7)Red sugarcane sticks, often known as "kumkum."
(8)'Pooja' flower decorations
(9)Clean clothing 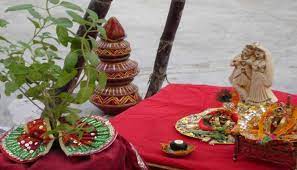 Complete method of Tulsi Vivah, mantra, aarti and story everything hereIt is believed that by getting Tulsi marriage all the troubles of life are removed. Know the simple and accurate method of Tulsi Vivah.Tulsi marriage is considered a very virtuous act in Hinduism. It is said that by doing Tulsi marriage, the result is equal to the donation of a girl child and happiness and prosperity comes in life. Tulsi is married to Shaligram in the form of Lord Vishnu....